Is Change in The Air at East Hampton Airport? 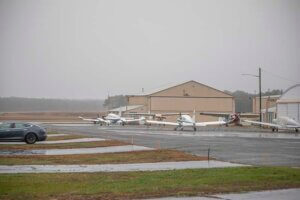 East Hampton Town Airport is either an essential South Fork economic engine or an environmental nightmare destroying the region’s lure, depending upon who’s asked, as the dogfight over the airport’s future hits new heights.

The airport’s proponents recently launched a publicity campaign seeking to convince residents why the facility is key to local businesses’ survival. Critics are abuzz about skyrocketing noise complaints since summer residents are staying into the offseason due to the coronavirus pandemic, bringing extra air traffic with them. Propelling the controversy is soaring speculation that the Town of East Hampton, which owns the airport, could close it down next year — with outrage sure to fly regardless of how the decision lands.

“They’re wrestling with some big decisions in terms of what they’re going to do when they get local control back,” Southampton Town Airport Noise Advisory Committee member Tommy John Schiavoni said of his neighbors to the east.

September is when Federal Aviation Administration (FAA) authority requiring the East Hampton town comply with grant-related conditions on the airport expires, allowing the town board to ground flights at the airstrip in Wainscott for good, if it so chooses.

“The FAA realizes that the Town of East Hampton’s decision is not simple and while the FAA encourages the preservation of airports, we recognize this is a local decision,” an FAA spokesperson said.

East Hampton Town Supervisor Peter Van Scoyoc has repeatedly said over the years that the town has exhausted its judicial means of quieting the skies surrounding the airport. But it remains to be seen if the town board will go as far as closing the airport to achieve that goal.

The last time an airfield on Long Island closed was in 2016, when the privately run Spadero Airport in East Moriches shuttered. Publicly owned, 570-acre East Hampton Airport is 11 times larger than Spadero and has five times as many flights, averaging more than 30,000 annually. By comparison, John F. Kennedy International Airport, the nation’s sixth largest airport, had that many flights in about a month before Covid-19 caused the commercial airline industry to tank.

While residents who live under East Hampton Airport’s flight paths got a temporary reprieve from the whir of jet engines, propeller planes buzzing, and the chuff of helicopter blades when air travel was halted at the pandemic’s peak in the spring, the noise came roaring back this summer and continued well after Labor Day, unlike year’s past. Several companies sell helicopter trips by the bundle between Manhattan and the Hamptons.

“There’s been cases cited of children commuting to school by helicopter,” Ron Klausner, who’s also on Southampton’s aircraft noise committee, told the Village of North Haven board meeting on Nov. 17.

Between 2015 and last year, aircraft noise complaints were up 23 percent overall, 56 percent for helicopters, and 40 percent for seaplanes, according to the Vector Noise and Operations Management System, one of three Hamptons noise monitors.

Federal authorities have pushed to reroute helicopter traffic over the water to minimize noise, but complaints persist. Some of the five East End towns are reeling in the seaplanes. East Hampton may soon join the Town of Southold in banning seaplanes from taking off, landing, or taxiing within 1,500 feet of shore, with offenders facing fines and potential jail time.

“It’s not as if closing this all of a sudden the skies go quiet,” she said. “There’s other airports.”

While the airport debate has been framed as a fight between the year-round Hamptons residents and the super-rich seasonal homeowners who fly in and out, King-Sweeny said middle-class communities also depend upon the airport and the money it brings into the community. To make her case, the alliance sent out 32,000 postcards to local residents, is asking businesses to put posters supporting the airport in shop windows, commissioned an economic impact study on its closing that will be released after the holidays, and will start an hour-long weekly radio show on the topic in January.

She added that it’s not just businesses, but the airport also plays a role in shuttling in donors to the many nonprofit fundraisers held annually in the region, although she noted that exactly how many such flights come in and out is hard to quantify.

“We believe there is a broad diversity of interest in the Hamptons,” she said.

There’s also a broad array of critics. Besides air traffic noise interrupting the enjoyment of the Hamptons famously serene environs, some also take issue with the aircraft emissions and toxins seeping into the ground at the airport. Forty-seven acres of the airport — nearly the entire size of Spadero — has been added to the New York State Department of Environmental Conservation’s Registry of Inactive Hazardous Waste Disposal Sites, better known as Superfund sites, after tests revealed perfluorinated chemicals in the soil and water.

“It is and has always been the environment which draws people here,” said Barry Raebeck, a Wainscott resident who cofounded the Quiet Skies Coalition and later broke off to form Say No to KHTO, a reference to East Hampton’s airport code.

While making a presentation at the Village of Sag Harbor board meeting on Dec. 8, Raebeck argued that the local construction industry, not the airport, is the true economic engine of the region. He also questioned the safety of its air traffic control tower only operating during the day and pilots having to land without ground support at night.

Sag Harbor Trustee Aiden Corish, an aviation enthusiast, countered that it’s not uncommon for small airports not to have a control tower and the fact that East Hampton Airport has one at all is a positive safety measure. Corish did, however, express concern about the mix of aircraft flying there.

“When you get this mixed use of really fast jets with slow single-engine propeller [planes], that’s when things do get dangerous because there’s different expectations,” Corish said.

King-Sweeny cautions that those hoping for a quick resolution come autumn should not get their hopes too high.

“I hope the town board would not think that September 2021 they could simply turn off the lights,” she said. “Any attempts to close the airport have to comply with local, state, and federal laws.”

Regardless of what happens, change is among the arrivals at East Hampton Airport, just as it has evolved from a tiny field for local single-engine airplane pilots in years past.

“Some people wax romantically about the days going out to the airport when they were kids and they’d like to see the planes taking off and landing and it was a fun thing to go out and watch,” recall Klausner. “That airport is long gone. If you go out today today to East Hampton Airport on a busy day you’ll see large helicopters, you will see the largest of private jets — there’s an assortment of everything.”

What’s next? Keep an eye on the sky.