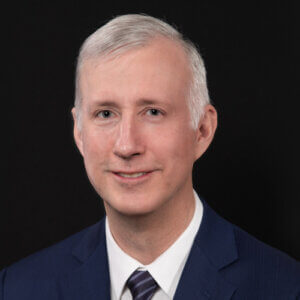 Colonel David Lange grew up on Long Island and was commissioned as a second lieutenant in the U.S. Air Force after graduating from the United States Air Force Academy.  He earned the aeronautical rating of Master Navigator and has over 3,600 flight hours in the Boeing KC-135R (Tanker) and Boeing E-4B (National Airborne Operations Center).  Colonel Lange is a decorated combat veteran of Operations Desert Storm (1991) and Allied Force (1999) and has planned and directed numerous other military operations across his 30 years of Active-Duty military service to include a number of humanitarian relief missions.  He was awarded the prestigious Institute of Navigation Superior Achievement Award for 1998 in recognition of his lifetime contributions as a practicing navigator.

Following his Air Force retirement, Colonel Lange returned home to Long Island where he worked for a while with an aerospace manufacturing company as the Senior Director of Business Development and also as a paid consultant for military, cyber, and aviation related projects.  He has a Project Management Professional (PMP) certification and has a published memoir as well as several dozen short stories, essays, and poems published in over 25 anthologies.  Colonel Lange regularly volunteers as a museum docent at Long Island’s Cradle of Aviation Museum and is an active participant in local veterans’ activities as an active member of the American Legion and Veterans of Foreign Wars (VFW).  He also volunteers his time as an Air Force Academy Admissions Liaison Officer.  Most recently, he was hired by Raytheon Technologies to work proposals for their Intelligence and Space business segment.