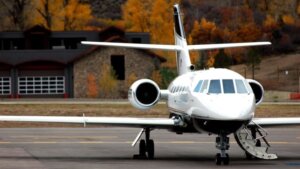 The coronavirus pandemic is redrawing the flight patterns of America’s private jets, as airports in resort towns see big jumps in traffic while flights near cities decline, according to a new report.

Private jet flights at Francis S. Gabreski Airport in Westhampton, New York, surged 172% in October, according to data from Tuvoli, an online payments platform for jets, compiled by Private Jet Card Comparisons. Flights at Aspen Airport in Aspen, Colorado rose 135% and flights at Vail were up 103%.

By contrast, private jet traffic at New Jersey’s Teterboro Airport — often the busiest private jet hub in the nation since it is used by the rich flying to New York City — plunged 52% in October. Private jet flights at Westchester, another popular airport for New York City, also fell, by 31%.

“It’s further proof that instead of of being at their Park Avenue apartments, the wealthy are in the Hamptons or Aspen,” said Doug Gollan, founder of Private Jet Card Comparisons.

The pattern was similar in cities and resorts across the U.S., as the wealthy fled New York City, San Francisco and other big cities for their resort homes. At the same time, business travel on private jets has virtually disappeared, which means fewer flights to major business hubs.

Private jet companies have seen strong growth in new customers for leisure flights during the pandemic as the wealthy — especially older fliers — avoid commercial flights for health reasons and prefer the more controlled environment of private jet terminals and their own planes.

“Instead of having a meeting in their office, a CEO will have a team fly to their home in the Hamptons or Aspen and have the meeting there,” he said.

Airports in Nantucket, Massachusetts saw a 26% increase in October, while nearby Martha’s Vineyard saw a 19% jump.

As for whether the private jet map is permanently changed by the wealthy’s new work-from-mansion model, Gollan said, it’s unclear.

“There is going to be a direct correlation between Covid and the pace at which big offices reopen or don’t open,” he said.

Correction: A previous version of this story misstated some of changes in private jet activity. Nantucket has seen an increase of 26% in private jet flights, while Vail’s airport has climbed 103%. Washington Dulles has fallen 40%.